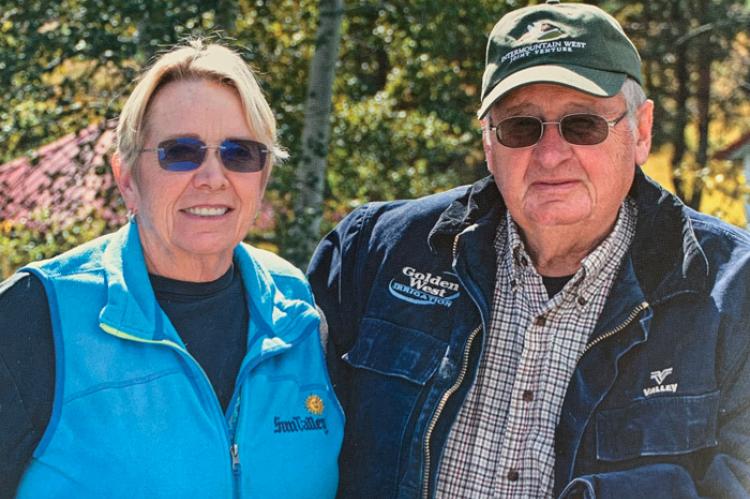 It's strangely quiet for an early October afternoon at Flying A Ranch in Ashton, Idaho. Trucks and tractor, potato windrowers and grain combines sit idle and unfamiliarly dust-free, waiting for the ground to dry enough for them to roar out of hibernation and do the work for which they were created. Mother Nature has been a tad inconsiderate to farmers in the gorgeous, mile-high Fall River country, unloading just enough rain (and occasion snow) to kee the Flying A's Atchley family out to their fields for harvest.

Family patriarch Clen Atchley has never minced a word in his life, and he's not about to start now. Nobody would describe him as a confrontational guy, but neither is he one to sugarcoat or shy away from the truth. Just to give you a taste:

That complete and unvarnished honesty-with his family, with his business associates and, perhaps most importantly, with himself-has propelled Atchley to having one of the most respected names among seed potato growers in the country. Clen's grandfather homesteaded in the Ashon area in 1901, when all that grew there were aspens and sagebrush. In the 40-plus years since Clen and his wife Emma came back to the family farm, he estimates that the acreage they farm has increased tenfold. These days, depending on the year, the Atchleys grow between 750 and 850 acres of seed potatoes, though they have in the past produced as much as 1,200.

When asked what has been the driving force behind such successful expansion over the years, Clen deadpans, "Stupidity."

"No," cuts in Clen and Emma's daughter, Laura, who today manages most of the farm's day-to-day operations. "what's made it work is that Dad's an amazing businessman."

"When we first came back to the farm," says Emma, "Clen actually had a business plan with goals. He wanted to accomplish certain things by a certain age, and he exceeded those expectations wildly. Right now, it's right about at the point where it's most efficient."

One of those innovations in efficiency is in the Atchleys' on-farm early-generation potato greenhouse, which has been operated primarily by Emma since 1990. Though operating the greenhouse along with the rest of the farm is no easy task, the Atchley's firmly believe it is their best option for producing the cleanest, highest-quality seed possible.

"Everything that comes out of that greenhouse is the basis for our seed operation," says Clen.

"It is time-consuming and labor-intensive," says Emma. "It's hard work, and it's complicated. We grow four generations, so for each variety, we have four different lots. If we have five different varieties, that's 20 lots to keep track of in the cellars."

That dedication to maintaining their entire farm as a home for clean seed continues to serve the family well. Potatoes are grown on a five- to eight-year rotation to keep the land as clean and healthy as possible.

"We decided a long time ago to try to be the most efficient operation around," says Clen. "And you can't maintain that kind of efficiency long-term without a commitment to quality."

"Right there," Emma says, pointing to Laura, "she knows her business. Laura is particularly meticulous about doing the seed business the right way. There are a lot of people out there who have come to respect her very highly, just like they respect Clen because she's made it very clear what our standards here are."

The Atchleys are not attention seekers; they eschew the limelight whenever they can. But attention has a way of finding people who are superb at their jobs. And there aren't many people as good at anything as the Atchelys are at producing high-end seed potatoes. That's why they are Potato Grower's Idaho Seed Grower of the Year.

At some point, with a little help from the sun and wind, the fields will be dry enough to fire up the tractors and harvesters, and the Atchleys will be out there, pulling some of the best- and without a doubt painstakingly curated-seed potatoes in the world out of the ground.

As appeared in Potato Grower Magazine 2019. Story and photos by Tyrell Marchant