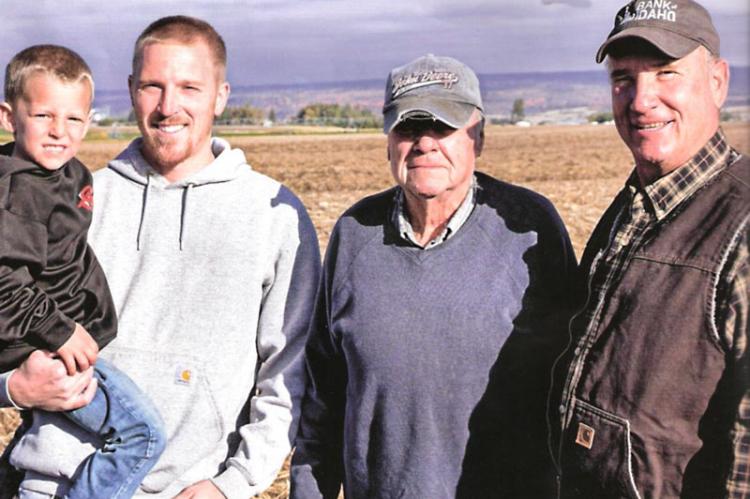 It's a bright, frosty morning in early October, the kind of morning you can tell is going to be perfect for spud harvest. Unthreatening clouds float across the sky, occasionally obscuring the autumn sun, and the hills north of Ashton, Idaho, are aflame with fall foliage.

Michael Steinmann and his crew are champing at the bit to get started harvesting their last 10 acres of seed potatoes, but they hold off, waiting for the frost to retreat a little farther in the face of the sun's advance. Conveyors are in place, ready to transfer the last few truckloads of seed potatoes from the trucks into the cellar. Nearby, those trucks sit in a field of brown potato vines, lined up next to New Holland tractors attached to Spudnik windrowers and harvesters.

Finally, the frost is deemed to have withdrawn far enough, and at some unspoken symbol, Steinmann's crew moves into action, almost in unison. The roar of diesel engines and the whir of moving machinery cut through the crisp air but somehow manages not to break the morning's peace. A proud, satisfied smile spreads across Steinmann's face. A good chunk of his havest crew is family, and a good many more feel like kin.

"I'll never ask any of them to do anything I won't work right alongside them or haven't done myself," says Steinmann, a man who has done just about everything there is to do on his farm.

Steinmann, Potato Growers's Idaho Seed Grower of the Year, is a third-generation grower born and raised on the farm in Ashton. His grandfather, Gus Steinmann, immigrated from Germany and bought the farm in 1918. The present-day Steinmann Farm shop and office sit on that original farmstead. Like everyone those days, Gus used the old-fashioned kind of horsepower to get things done on the farm. With the onset of agriculture's mechanical age, Gus hung up the harness and handed things over to his only son, Herb-Michael's father- upon Herb's homecoming from the Korean War in 1953. Herb remains in Ashton to this day.

Michael Steinmann is undeniably proud of the legacy left for him by his forebearers. He remembers his grandfather fondly and cherishes the time on the farm he still gets with Herb.

"My grandfather was a firm believer that you're only as good as your word," he says. "So am I. If you say you're going to do something, you'd better darn well stick with it."

"I'm very grateful to my dad for teaching me to work," he continues. "Thanks to him, I've never been afraid of diving in and doing anything. hopefully, I've passed that on to my kids, too."

Steinmann graduated from Ricks College (now BYU-Idaho) with an associate's in farm crop management and came back to the farm in the early 1980s with his wife Kim, a fellow North Fremont High alumna who grew up in nearby Squirrel, Idaho. But times were tough for young farm families, with interest rates approaching 20 percent. Michael and Kim tried to make a go of it, but after five years decided to go back to school. In 1985, they packed up and moved to Logan, Utah, where Michael attended Utah State University. As it turns out, leaving the farm may have been the best move for ensuring his future on it.

The Steinmann's lived in the Logan area for five years, and Michael wound up working at E.A. Miller Beef, where he eventually worked his way up to the position of accounts receivable and claims manager. one day he got a phone call from a farm equipment dealership back home, offering him a job. After some serious thought and prayer, they made the decision to head home.

"It was a hard decision; I had to take a pretty big cut in pay'" Steinmann says now, "But it got us back to the area. We decided it would be good for the kids to be around their grandparents."

The decision paid off. In 1992, Steinmann took over the farm from his father. Right away, he tried something new: growing red seed potatoes for a garden wholesaler friend in Logan. It was just three one-acre lots that first year, but selling into that market has been an unqualified success.

"Back then, there weren't any reds around here," Steinmann says. "We were in competition with our neighbors, and I didn't want any competition. These varieties eliminated the competition because I was one of the only guys doing it at the time.

"We still sell a lot of potatoes to garden center all over the Northwest-from Seattle to Portland to Boise to Salt Lake."

All Steinmann's garden seed is packaged in 50-=pound bags right there on the farm and shipped through February and March-between 15,000 and 20,000 bags annually. Then bulk seed starts going out to commercial growers, most of them in eastern Idaho. Depending on the year and customers' needs, Steinmann will grow anywhere from eight to 18 varieties.

As the farm approaches the century mark, Steinmann can't help looking to the future. He and Kim have raised their family of six children on the old place. Their son Rob is there full-time, and Rob's young son Ryder represents the fifth generation on the farm. He knows farm life presents a rare opportunity to spend like working alongside his family, and he's grateful for that.

"Time is always at a premium," Steinmann says. " I like to spend as much of it as I can with my family. That's what's important to me. That's what it's all about."